Analysis and trading tips for GBP/USD on July 15 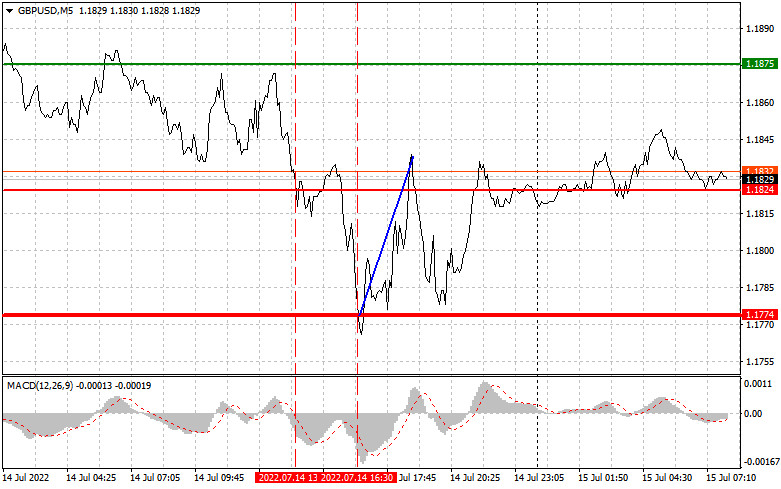 GBP/USD tested 1.1824 on Thursday. At that time, the MACD line was quite far from zero, so selling would not be appropriate. However, contrary to what was expected, the pair declined and went to 1.1774. Buyers became active around this area, resulting in more than 60 pips price increase. No other signal appeared for the rest of the day.

GBP/USD fell yesterday because demand for dollar surged amid strong US PPI report. It hit a new yearly low, which opens an opportunity for an upward correction.

Once again, there are no reports about the UK economy that are scheduled to be released today, but buyers could take advantage of this moment to push pound up. However, the increase will only be brief as the US will release data on retail sales and industrial production, as well as reports on consumer expectations and consumer sentiment. Strong values will keep dollar demand high, forcing the pair to continue declining throughout the day.

Buy pound when the quote reaches 1.1845 (green line on the chart) and take profit at the price of 1.1892 (thicker green line on the chart). Although there is little chance for a rally today, traders can still take long positions when the MACD line is above zero or is starting to rise from it. It is also possible to buy at 1.1815, but the MACD line should be in the oversold area as only by that will the market reverse to 1.1845 and 1.1892.

Sell pound when the quote reaches 1.1815 (red line on the chart) and take profit at the price of 1.1766. Pressure will return if the US releases another strong retail sales report. However, when selling, make sure that the MACD line is below zero or is starting to move down from it. Pound can also be sold at 1.1845, but the MACD line should be in the overbought area, as only by that will the market reverse to 1.1815 and 1.1766. 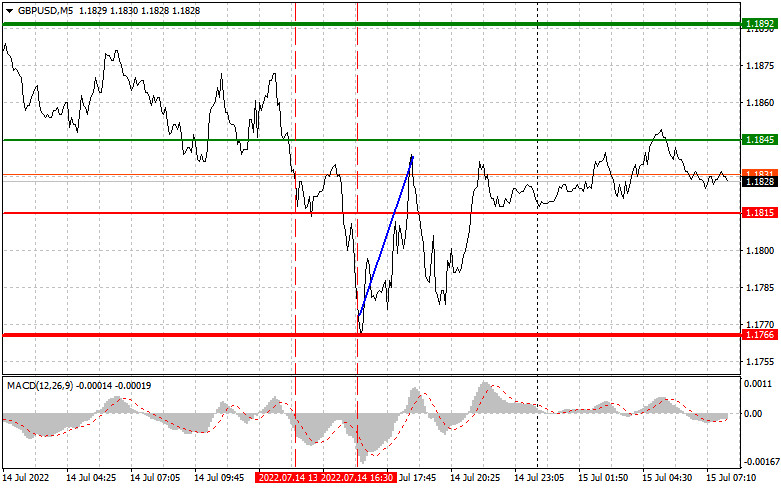 And remember that for successful trading, you need to have a clear trading plan. Spontaneous trading decision based on the current market situation is an inherently losing strategy for an intraday trader.

Analysis and trading tips for EUR/USD on July 15

Bulls retreated from the market. Bitcoin collapsed on expectations...

Technical Analysis of BTC/USD for January 10, 2022

Increase in energy prices could leave people without food

Analysis of GBP/USD on January 15. The pound is also ready...