Analysis and trading tips for GBP/USD on January 27 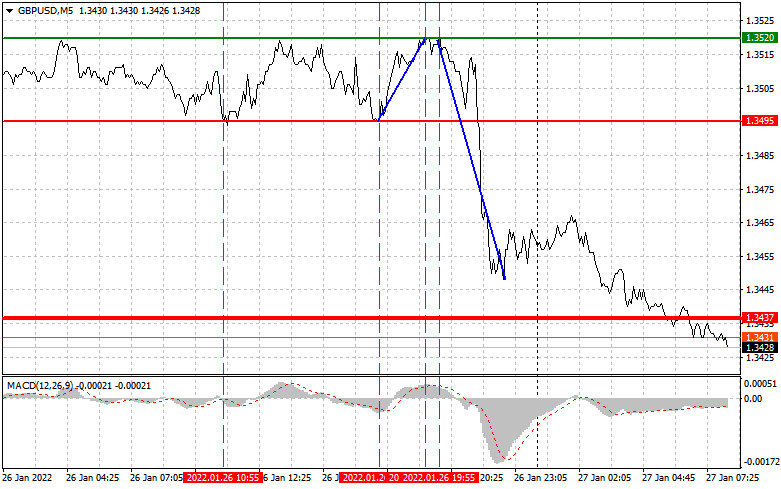 GBP/USD hit 1.3495 early Wednesday, but there was no strong movement even though the MACD line was below zero. It was only on the second test that the pair moved, however, the indicator was in the oversold area, so traders bought in the market. Such led to a 25-pip increase in the pair. And when the pair hit 1.3520 during the US session, the MACD line was in the overbought area, so short positions prompted a 70-pip decrease in the pair.

The stance of the Fed towards interest rates remained unchanged, so pressure returned on risky assets. That led to another dip of GBP/USD. And most likely, this bearish movement will continue because in the afternoon, the US will publish data on 4th quarter GDP. A strong figure will prompt higher demand for dollar, which will push GBP/USD lower. Reports on UK retail sales, US durable goods orders and US jobless claims will have little effect on the market.

Before buying, make sure that the MACD line is above zero, or is starting to rise from it. It is also possible to buy at 1.3421, however, the MACD line should be in the oversold area as only by that will the market reverse to 1.3443 and 1.3471.

Sell pound when the quote reaches 1.3421 (red line on the chart) and take profit at the price of 1.3392. The market will remain bearish if data on US GDP outperforms the previous figures.

Before selling, make sure that the MACD line is below zero, or is starting to move down from it. Pound can also be sold at 1.3443, but the MACD line should be in the overbought area, as only by that will the market reverse to 1.3421 and 1.3392. 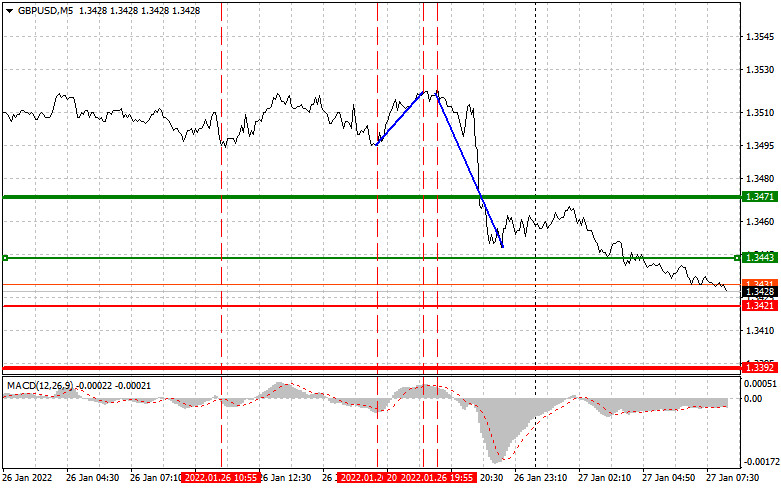 Technical Analysis of ETH/USD for January 27, 2022

EUR/USD. Fed allowed the US dollar to rise

Russia and EU to clash in energy market

Technical analysis of EUR/USD for January 21, 2022